Bolts are elastic by nature, meaning that within their elastic range, they'll stretch as the load on the bolt increases. As long as the bolt is not stressed beyond its proof load (the maximum load a bolt can withstand and still behave in an elastic manner), it will return to its original length once the torque is relieved. However, conventional bolts can be an issue when they are used on aluminum heads, given that the expansion rate of this type of head can stretch typical bolts past their yield point. This can be overcome by designing and offering better fasteners to address these conditions.

Traditionally, a torque specification is a calculated number. This torque specification applies the proper clamp load to the joint while accounting for friction provided by the threads and the underside of the bolt head. Today’s engines require higher clamping forces (due to increased combustion pressure) which cannot be achieved with conventional small diameter bolts normally found in these engines. Unfortunately, using a larger diameter bolt is not the answer, as the larger a bolt it is, the less it will stretch. Remember, bolt stretch is how we get maximum clamping load.

Used by many manufacturers, especially on engines with aluminum heads and in conjunction with Multi-Layer Steel (MLS) head gaskets, T-T-Y (Torque-To-Yield) head bolts are engineered to stretch within a controlled yield zone. Once they reach this zone, they maintain a more precise and consistent level of clamping force across the entire head-to-block mating surface. The bolts are stretched into their elastic range, and in many cases, the stretching approaches the bolts' elastic limit, permanently stretching it.

Getting to the precise yield zone (for maximum clamping force) is accomplished by tightening bolts to a certain torque spec, then turning the bolts a pre-determined number of degrees. Rotating the bolts a set amount of degrees and putting the fasteners in the yield zone will account for “clamp load scatter” or variations due to conditions such as assembly lubricant type, bolt and bolt hole thread condition, and surface finish of the fasteners. 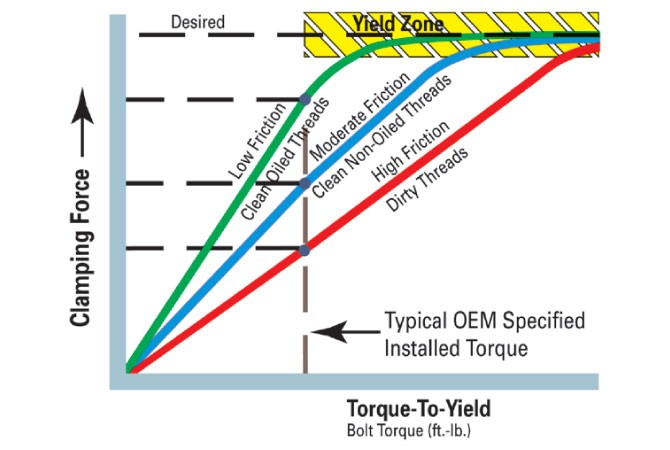 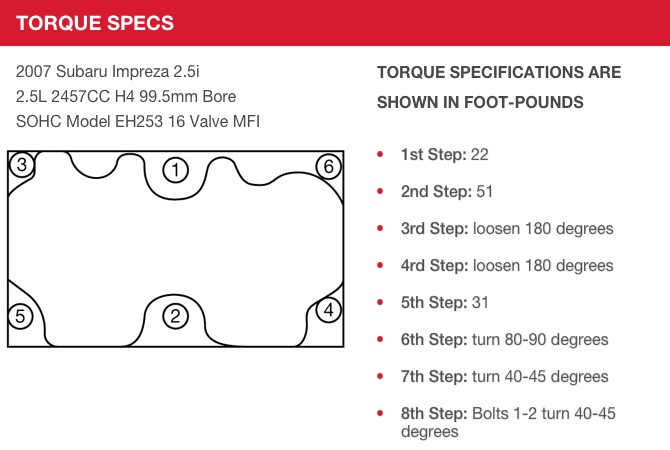 While this sequence is more complicated, especially since every head bolt must be tightened this way in a certain order, it provides much more consistent clamping force which creates a better seal.

When T-T-Y bolts are rotated to their final number of degrees of rotation, T-T-Y bolts can approach their elastic limit and become permanently stretched. If removed and reused, it is likely that either the head gasket will fail (due to low clamp load) or the bolts will break.

Fel-Pro offers replacement head bolts for T-T-Y that are application-specific. You should always replace the T-T-Y bolts; these bolts are designed to stretch, and reusing them will cause improper, uneven torque and clamping force. Stretched bolts can yield in the threaded portion or the shank portion. Yielded bolt threads can damage threads in the engine, especially on aluminum blocks, and since the bolts are weakened, they may break if retorqued.