Fujifilm Lets You See The Pressure!

Fel-Pro engineers use many testing procedures when validating gasket designs at the Fel-Pro engineering, manufacturing and distribution center in Skokie, Illinois. One validation test performed includes a pressure-sensitive film made by Fujifilm, which allows us to visualize the distribution and sealing pressure created by gaskets. This impression test is a window inside the internal structure of a cylinder head and block combination, which is critical in the design phase of a gasket.

The film is impregnated with microscopic cells filled with red dye. When pressure is applied to the film, these cells burst. The higher the pressure, the more intense the color left behind. The sheets can be placed on the top, bottom, or both sides of a gasket. The imprint left behind on the film after a test is performed allows our engineers to see where the gasket loading is good and areas that need attention. Using unique software and scanner setup, the film is scanned, and the data is cataloged for engineering reference. The image created from the ink is computer enhanced to display the variation in color density as a rainbow of colors, with corresponding approximate pressure ranges. Fel-Pro engineers also use the test results to create a colorized 3D version of the pressure image. Tests are run on both OE gaskets and Fel-Pro replacement gaskets during the design process, evaluating both for areas that need enhanced sealing design. 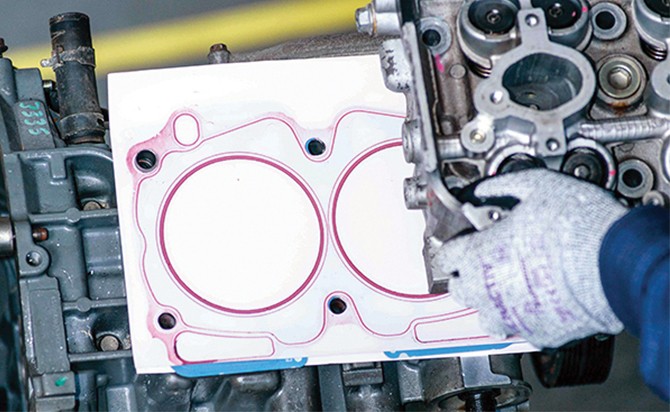 The evaluation includes checks for proper loading of the combustion seal, oil and coolant passages, and emboss beads on MLS (Multi-Layer Steel) cylinder head gaskets, as well as on the surface of the cylinder head or engine block deck. With every design change made to a Fel-Pro gasket, we test it in many different computer modeling programs, and retest it with the Fuji paper to see the difference. The results allow us to see where we may need to add, remove, or change the shape/height of an emboss bead on a gasket to create even sealing stress across the entire cylinder head. 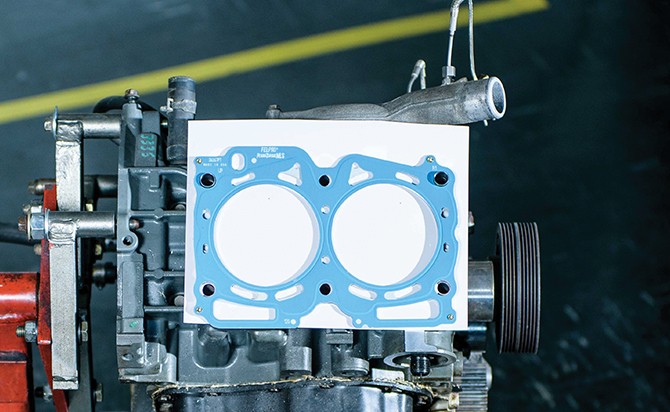 To accurately record the sealing stress after running, head bolts are torqued to “pull-up” torque, which allows us to duplicate the torque value on each bolt sealing the gasket. This is important, because head bolts installed at 75 ft-lbs may only be at 60 ft-lbs after heat cycling.

To determine pull-up torque, each bolt and the cylinder head are marked with a witness line. Each bolt is then loosened in proper sequence, one at a time, and “pulled up” with a beam style torque wrench to the witness mark. The torque value required to line each bolt up to the witness line is recorded. The bolts and head are then removed, and the new film is put in place. Each bolt is returned to the same hole it was previously installed in, and retorqued to the pull-up torque values. This allows us to recreate the pressure the gasket would be under once installed on a running engine, and see the loaded created by the gasket at the “relaxed” torque.

This Fel-Pro sealing pressure validation is just one of the many tests run to make sure each gasket is worthy of the Fel-Pro name.